Taichung City, in central-western Taiwan, is growing rapidly. With around 2.8 million inhabitants, its main transport corridors are heavily congested.

This is especially noticeable at the major interchange near the suburban Daya area. The highway ramp metering system there often leads to oversaturation and congestion, spilling to nearby urban roads and junctions, and reducing network efficiency. On busy days, drivers experience up to 45 minutes of delays. In total, the area includes 535 kilometers of roads and 61 signalized intersections.

To improve traffic flow in the area and limit delays at intersections, Taichung City implemented a number of engineering actions, such as adding lanes near junctions, and allowing use of hard shoulders during peak hours.

But to make the best use of existing infrastructure and to optimize traffic on a strategic level, in 2017 the city joined forces with Far EasTone Telecommunications and PTV Group. Together, they established an Intelligent Transport System (ITS) in and around the Daya interchange, based on the software PTV Optima and PTV Balance.

PTV Optima, the traffic management software, combines real-time data with a model-based approach. That results in a detailed analysis of the current traffic situation, and a comprehensive forecast for a period of up to an hour. The system detects incidents at an early stage, and helps operators work out a response to reduce negative impacts on traffic.

Based on the analysis and prediction of PTV Optima, Taichung now provides motorists at Daya interchange with alternative route guidance published on digital road signs. Because the software calculates the rerouting effects on the entire area, drivers always receive reliable recommendations.

He added: “The ongoing ITS system phase 2 will expand to include more real-time data sources, such as mobile phone and GPS data. Thanks to the support of PTV Group, motorcycle algorithms will also be implemented into the system to better localize to traffic conditions.”

To optimize signal control, six intersections in the Daya Region were equipped with the dynamic signal timing solution, PTV Balance. Based on data provided by detectors placed along the roads, the software identifies changes in transport patterns and reacts to them.

As a model-based control system, PTV Balance goes even further: It automatically designs a range of signal control options and sends them local controllers, in 5-minute intervals. This way, Taichung City coordinates ramp metering in the Daya Region and reduces travel delay for motorists. 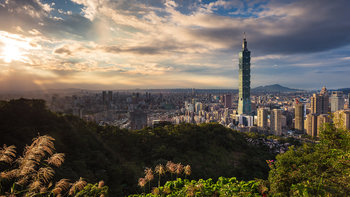 Drivers and traffic operators get information on all important roads in the country.

Implementing a new vision for managing road traffic and lowering costs of transportation.