Times Square is the beating heart of New York City. Given the huge number of people visiting and working there, any new development around it needs to balance their mobility and safety needs with the desire for robust economic activity.

This was the challenge faced by the planners of a $500 million redevelopment of One Times Square – perhaps the area’s most famous building. In major cities, like New York, it is the responsibility of the developer to prove to the city that their development will not significantly impact the surrounding area, before any construction is approved. With pedestrian traffic, it means a complex analysis.

Supported by modeling from PTV Viswalk software, however, the developers were able to gain approval for the project and it now goes ahead. This coincides with a sharp rise of tourism and pedestrian traffic in the area, as it rebounds from the corona pandemic.

Built at the turn of the 20th century, One Times Square is famed for being the former home of the New York Times, and later for hosting the world-famous New Year’s Eve ball drop. Most visitors to Times Square recognize the structure, but its façade is largely blocked by digital billboards.

The current redevelopment, by real estate investor Jamestown, aims to open much of the building’s interior to the public. This includes creation of a viewing deck, museum experience, and commercial spaces.

To assess how the project will affect pedestrian flow, Jamestown hired consultancy AKRF. "The repurposing of One Times Square would need to accommodate a significant amount of pedestrian traffic in the building, while ensuring elements outside the building - entrances, queueing lines, security checks, etc. - do not adversely affect the pedestrian operations in the adjacent plaza”, says Michael Beattie, Vice President of AKRF.

To model how pedestrians would flow through the building’s entrances, 20 floors, and viewing deck, AKRF chose PTV Viswalk. “We needed a visual tool that illustrated for the client how the space would function, and account for pedestrian elements that impact one another”, says Beattie.

Work is now underway, and the developers expect the redesigned One Times Square to open to the public in mid-2024.

PTV Viswalk model provided the client with various metrics for each floor and the building as a whole, including pedestrian densities and time spent in various experience areas 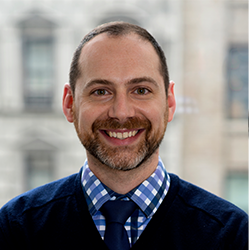 Pedestrian flows simulated for the whole building and surroundings

Based on simulations, planners can avoid pedestrian bottlenecks

Authorities approved the project, and it is underway