The City of Melton, located 35km northwest of Melbourne, is one of the fastest growing population centers in Victoria, Australia. It covers an area of over 500km2 with a population of over 200,000 people. It is forecast to grow to over 450,000 people by 2051.

On such a rapid growth trajectory, Melton City is facing a lot of challenges to make sure the infrastructure within the city and its connection to Metropolitan Melbourne are keeping up. To tackle the challenges, it was key to establish a comprehensive multi-modal demand model.

Land use transportation planning is required from the model as the city needs to understand the traffic impact of the population and employment growth on the public and private transport infrastructure.  On the other end of the spectrum, the model should also provide sufficient details to assist the city in advocating road projects such as intersection and interchange upgrades, bicycle paths and others.

To set up MITM, the consultancy managing the project, Clarity, selected PTV Visum software. The main reasons for this selection were PTV Visum’s advanced demand modelling and public transport functionalities, as well as its unique Simulation Based Assignment (SBA).

SBA is a mesoscopic assignment method that enables planners to simulate individual vehicles and their interaction with each other and the road network. The result is a more detailed and realistic performance representation.

SBA is also extremely helpful to understand the impacts of signals and other intersection types on the flow of traffic. In other words, SBA of PTV Visum effectively simulates individual vehicles in a large-scale area, allowing for more detailed operational traffic issues to be accounted for. The 3D visualization of SBA results also helps explain complex traffic and transport issues and deliver mitigation plans in a visual simulation manner to non-technical decision makers.

MITM, which was deployed in June 2022, consists of 836 travel zones, 25 public transport line routes, 6 Park and Ride facilities, 432 intersections and 103 signals. The modelled time periods are 7-9am and 3-6pm, with a time interval of 15 minutes.

Since the deployment of MITM, the model has been used for several projects including local area planning for the Rockbank North Major Town Centre and major infrastructure planning for the Western Freeway Upgrade.

Trent Ekanayake, Director of Clarity, says of the model: “Hybrid demand and operational modelling tools such as MITM are truly game changers in the transport modelling space, as they allow for a single tool to assess all aspects of transport systems from land use trip production to detailed intersection performance. The advancements of PTV Visum in the mesoscopic dynamic assignment space with SBA have finally enabled such tools to be developed, expanding the possibilities of how we assess and add value to the transport planning process.”

“MITM can provide both strategic and operational insights for better decision making and for Council’s evidence-based advocacy. It is a credit to PTV Visum package that enabled us to co-develop an SBA based tool which could be maintained and used by a very small team of transport planners within a local government context” 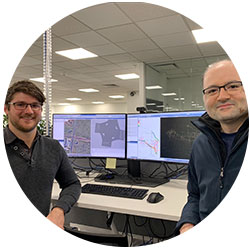 Deployment of multi-modal transport model for the entire city

City uses model to plan its population and mobility development

The city’s major interchange gets ITS, cuts delays by 10%.